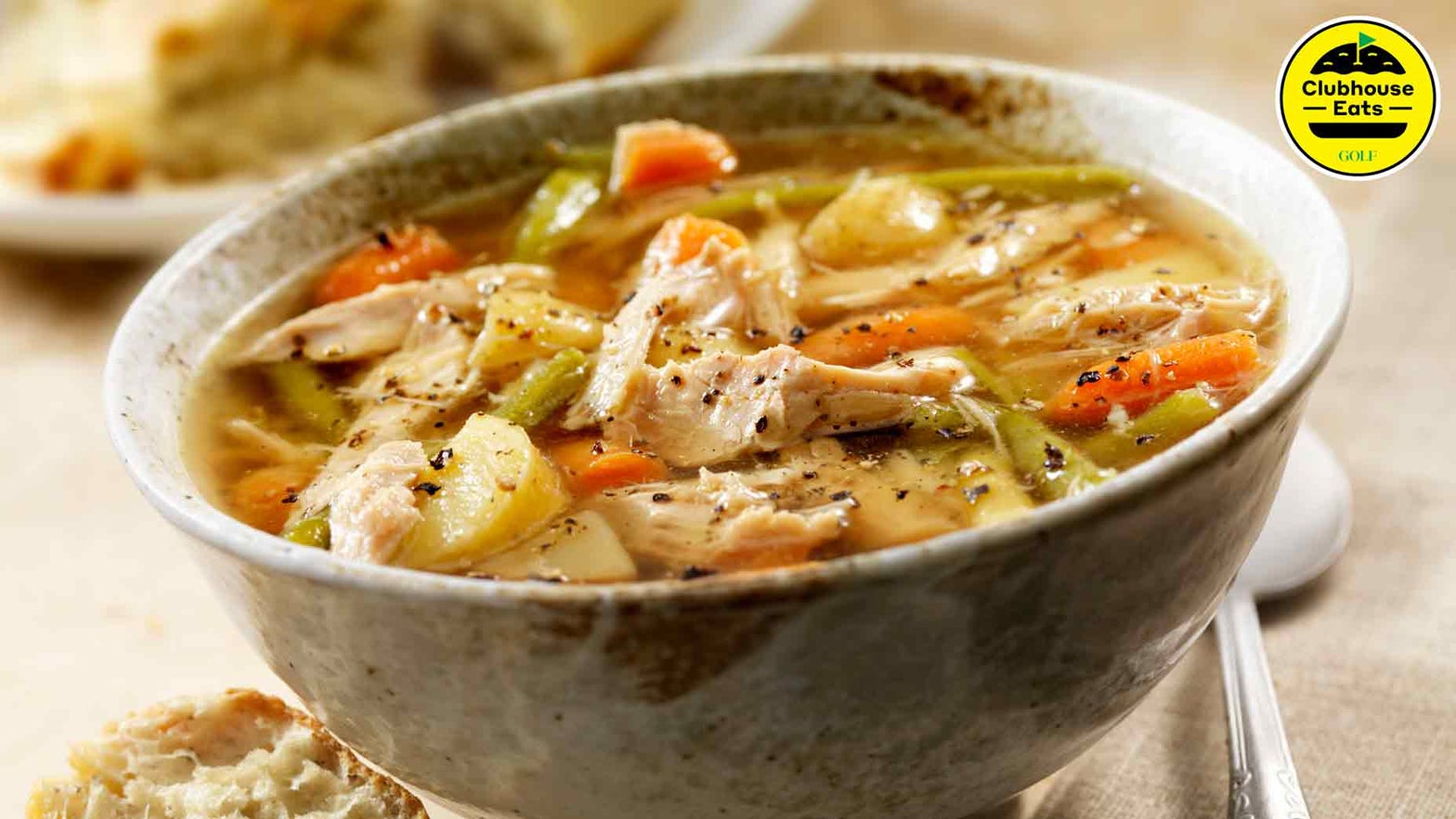 There’s nothing like a hot bowl of chicken soup in the winter.

Perhaps it had something to do with when the story was published: February 6, 2022: The middle of winter, when much of the country was covered in swaths of snow and ice.

On cold days, there’s nothing quite like the allure of homemade chicken soup. Universally beloved, and delicious even in its most basic form, chicken soup is a comfort like no other. And Shaun Lewis’ personal recipe was not only the most-read Clubhouse Eats story of the year, it also captured all the way into the year’s top-15 stories in any category — pretty impressive!

To live the magic, you can check out the full article below, or view it in its original form here.

Hey, there’s no time like the week before New Year’s to try your hand at something new in the kitchen.

By Shaun Lewis, a classically-trained chef and cocktail master, and current general manager of Old Westbury Golf and Country Club, on Long Island.

It’s the dead of winter. Maybe you’ve just finished shoveling snow. Or scraping ice off the windshield. Or salting the driveway.

Or maybe you’re just shivering in the cold.

When the temperature drops at Liberty National Golf Club, in New Jersey, where I work as assistant general manager and executive chef, I like to serve chicken soup as a gird against the chill.

It’s hearty, healthy, and belly-warming. And I’ve shared my recipe for it below.

Maybe you’ve got your own favorite method. Don’t let me stop you from following it. Just promise me that you’ll abide by a few simple rules.

Most store-brought broths and bouillon cubes are little more than salty water. A homemade base is so much better, well worth the extra effort.

The difference is stock is made with bones, while broth is made with bones and meat. I recommend the latter. For starters, broth tends to be more flavorful and gelatinous. You can also preserve the meat and add it back to the soup.

KEEP THE JUNK OUT

Whether you’re making stock or broth, you want to keep them clear, not cloudy. Start by rinsing off the bones in cold water. Then, add the bones to your pot with an ice-cold gallon of water and slowly bring it to a simmer, letting the impurities float to the top. Skim off with a large spoon or ladle. After you get that out, add your mirepoix (chopped vegatables) and simmer for two hours, skimming fat and other impurities every 20 minutes or so. Strain through a fine-mesh sieve. Throughout the process, take care not to let your stock or broth come to a rolling boil, as that will break down the ingredients, setting loose more impurities.

USE THE BASIC BUILDING BLOCKS

A good ratio to go with is:

4 pounds of chicken/bones per gallon of water

Note: The better your ingredients, the better your soup. Get the freshest possible vegetables and the highest quality chicken you can find, preferably free-range and organic.

The chicken will probably be about 4 1/2 pounds. You want to break it down into eight pieces, with the meat kept on the bone. You can do this yourself or have your butcher do it for you.

Fill a large pot with cold water, add your chicken pieces and bring to a simmer on the stovetop, with a pinch of salt, garlic, bay leaf and thyme.

While the chicken is cooking, peel and prepare your veggies, chop them into “walnut size” pieces and reserve them in prep bowls.

By the time you’re finished with your veggie prep, your chicken should be cooked. With a slotted spoon remove the chicken pieces and set them aside to cool. Skim out anything floating on top of the pot, then remove the garlic, thyme and bay leaf.

Add your wax turnips. These are the densest of the vegetables and will take the longest to cook. Make sure the pot is at a gentle simmer. After the waxed turnips have been cooking for five minutes, add the carrots. After another five minutes, add the rest of your vegetables and let cook for another 15 minutes. Turn off the heat. In a separate pot, prepare your pasta (if you’re using it). Take care not to overcook the pasta. But don’t leave it al dente, either. You want it cooked through until it’s tender. If it’s not cooked enough, the noodles will absorb the stock.

While the pasta is cooking, wash the parsley under cold running water, shake it off and wrap it in a paper towel to dry before chopping it roughly. No need for a fine cut here; this is a rustic, country soup. Add your pasta and parsley to the soup and finish by seasoning with fresh ground black pepper and salt.

Once it’s all done, I like to put it in quart-sized takeout containers. This helps it cool down faster and it’s ready to go out for delivery or into the freezer when it’s cool.

As a four-year member of Columbia’s inaugural class of female varsity golfers, Jessica can out-birdie everyone on the masthead. She can out-hustle them in the office, too, where she’s primarily responsible for producing both print and online features, and overseeing major special projects, such as GOLF’s inaugural Style Issue, which debuted in February 2018. Her original interview series, “A Round With,” debuted in November of 2015, and appeared in both the magazine and in video form on GOLF.com.